We’ve previously discussed the difference between the Celtic countries Irish Whiskey and Scotch Whisky. Though if we turn our gaze towards the west (and maybe towards our shelves) we can see something else on the horizon, Bourbon. So what is this mysterious Bourbon Whiskey, and how does it differ from Irish Whiskey? Let’s dig in and find out.

What's the difference between Bourbon and Irish Whiskey?

It's worth noting that while most Bourbon brands use the spelling of Whiskey containing the ‘e’, the Alcohol and Tobacco Tax and Trade Bureau (TBB) note the spelling in their regulations as Whisky without the ‘e’. For the sake of this article, we will be spelling whiskey, bourbon, or otherwise with the ‘e’.

While what we call Irish Whiskey today is as different from that original product as a cow to a cat, Irish Whiskey has its roots centuries ago. From the first written reference to Irish distillation,  from the mid-14th-century book the Red Book of Ossory,  the gifting of a cask of whiskey to Queen Elizabeth I in 1541. To the formation of the four great Dublin Distilleries: John Jameson & Son of Bow Street, John Powers & Son of John’s Lane, George Roe & Co of Thomas Street, and William Jameson & Co of Marrowbone Lane, Irish Whiskey flourished.

After, due to the advent of the Coffey Still and its subsequent adoption by the Scots and refusal by the Irish, the spread of the British Empire and the War of Independence and the following Irish-Anglo Trade War, American Prohibition, and the First and Second World Wars (to name a few factors) Irish Whiskey sadly declined. It would not be until the turn of the 20th century that Irish Whiskey began its resurgence, and to this day still rises. Known throughout the world for its smooth character, depth, diversity, and long history, across the pond the United States have long produced a whiskey of their own, Bourbon.

While America had been distilling whiskey since colonization Rum was their first drink. Ships carrying slaves bound for the new world also carried with them molasses with which rum could be distilled. With the 1808 ban on the importation of slaves from Africa those ships stopped bringing those supplies with them, whiskey became the drink of choice and it quickly grew in popularity, as can be seen by the United States' first President George Washington being a distillery himself.

With people flocking to the new world, rye whiskey blossomed due to its easy growth, as opposed to barley that struggled. Shortly after land grants were promised to those to Western Virginia under the promise of growing corn. It was a Scotsman by the name of Dr. James Crow who is perhaps most influential in the creation of bourbon, however, with his perfection of the sour mash process in which some of the older mash is kept and used to begin fermentation of the following batch.

The history of the two products is startlingly similar, considering the years and countries between them. When we get down to the products themselves, however, that’s when we see the difference between bourbon and Irish Whiskey.

Bourbon likely gains its name from Bourbon County in Kentucky. The county itself takes the name from the French General Lafayette Bourbon and the House of Bourbon in France as gratitude for the French assistance during America's Revolutionary War. Despite the fact that Bourbon originated here, it can be made anywhere within the United States, though has a strong connection with the Kentucky houses.

The history of innovation between the early Bourbon and Whiskey distillers is remarkably close, though the process of making the two drinks differs heavily.

Irish Whiskey has a few styles in its pockets, Single Pot Still, Single Malt, Single Grain and Blended. The distillation and mash bill (what grains can be used to make the whiskey) differ among these, so we’ve listed a brief overview of those styles below. The term Single always denotes that the whiskey comes from a single distillery.

Blended whiskey is made from blending various whiskeys together, creating a complex flavour.

After these restrictions, Irish Whiskey must also be and distilled to a strength of less than 94.8% with the distillate retaining the aroma and taste of the materials used and aged for a minimum of three years in wooden containers, not exceeding 700L. It’s a brief overview but these are the core points of what makes Irish Whiskey Irish Whiskey.

Bourbon is regarded as a member of the whiskey family however, there is a big difference between the product. Check out the guys at BourbonInspector.com with their take on this discussion.

So, what goes into that glass of Bourbon? Whiskey comes in a variety of styles and Bourbon does too, though they are less well known outside of the United States as the styles of Whiskey would be known outside of Ireland. Let’s run through a few of those styles quickly.

We’ll look at the varying differences in a second, but a brief overview of what Bourbon is as follows;

What about those casks? While many people believe that Bourbon can only be matured in Charred Virgin American Oak, the text stated in the TBB’s regulations quote Charred Virgin Oak. While most Bourbons will use the American Oak (Quercus Alba) there are a few people who have noted this wording and are using other styles of Oak, such as French (Quercus Robur).

It’s a different beast to whiskey to be sure, and it's worth noting that while Whiskey carries a minimum age statement Bourbon has no minimum age limits. It must be aged in Charred Virgin Oak of course, but Bourbons as young as three months have been known to enter the market, though any Bourbons aged for less than four years must state their age on the bottle thereby giving the game away.

Here’s where we come into Straight Bourbon, which must be aged in those Charred Virgin Oak barrels for a minimum of two years, though they can be mixtures of two or more Straight Bourbon Whiskeys with the stipulation that these Straight Bourbons were all produced in the same state. The distillery does not matter in this case.

Those would be the big three. While those laws seem strangely stringent and flexible at the same time, it has spawned a large industry. There are multiple other varieties. That mash bill of at least 51% corn means the other 49% is open to playing with. Thus, resulting in the likes of Corn Bourbon, made with 100% corn, Rye Bourbons and High Rye Bourbons. Thus containing a small or a large amount of rye in the mash bill, and wheat Bourbons made with wheat.

While talking about that goes into the Bourbon can run on for hours. The most common way we would know the difference is by what goes into the glass. The nose and palate of Bourbon differ greatly from that of a Whiskey. It’s a fantastic way to pass an evening by nosing and tasting a glass of bourbon on the one side and a glass of whiskey on the other.

Bourbon is a sweet tooth drink. Big and beasty, the corn element and those charred virgin oak barrels. Especially the American, give a plethora of sweet notes, vanilla, caramel, honey, and almonds. A big influence on this is the climate, and think about it; America, particularly Bourbon’s spiritual home Kentucky, sees much higher temperatures and temperature fluctuations than Ireland or Scotland. These big swings play with the casks and the reactions within, helping those flavours along substantially. Whiskey, on the other hand, is still sweet, but the flavours tend to be less boisterous and more at ease. Thus, giving a smoother fruiter balance of light caramel, green apples, coconut, and retains that flavours of the barley.

It's often said that all Bourbons are Whiskeys, but not all Whiskeys are Bourbons. And their truth behind that. The spirits are close cousins but being cousins they vary incredibly through their creation, their aging, and their character. The best way to judge the difference for yourself? Sit down one evening with a glass of Whiskey on one side and a glass of Bourbon on the other. Taste your way through them, and get to understand the joys behind each.

Lambay Irish whiskey is a premium whiskey. It's matured in a bourbon barrel and cognac cask finished 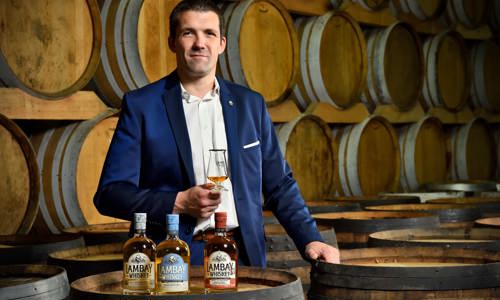 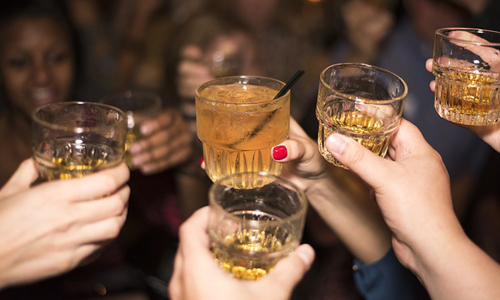 Ordering Whiskey at a Bar: many styles, thousands of whiskeys

Ordering whiskey at a bar? Allow us to be your spirit guide and give you some whiskey lover tips.